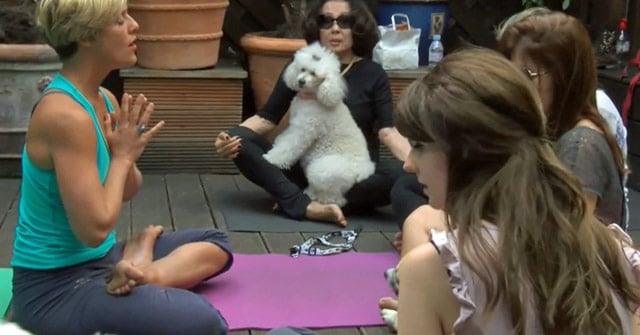 Dog yoga is an actual thing. In fact, it’s called “doga,” which is a horrible name, but it gets the job done.

If your first instinct when hearing about doga is to assume it’s some sort of silly fad, you’re not alone. Critics say there’s no way canines can properly commit to the practice, and that even if you’re able to get your dog to calm down long enough to help her do some stretches, you don’t know whether her muscles are sore or tired, so it can be dangerous for the animals.

Another concern is that doga is a way for pet owners who don’t spend enough time with their animals to force them into an activity they’re not comfortable with. Of course, all dogs are different, and some take to the practice more quickly than others to become dog yogis (dogis?)

On the other side of the spectrum, proponents say that doga increases the bond between owner and pet and can give some dogs – especially those cooped up in small apartments – a chance to get valuable exercise, stretching, and massage.

How Does Dog Yoga Work?

Having been featured of numerous media outlets, Mahny Djahanguiri is one of the most prominent doga teachers. She has her own doga website and has written an instructional book called Doga: Yoga for you and your Dog.

In her sessions, Djahanguiri begins with breathing and chanting exercises. While initially she used the dogs more as props (for instance, cradling them with one arm while in warrior pose), she began incorporating on inversions and extensions specifically for the pets to satisfy demand from her clients, who want their puppies to get a good workout as well.

In a BBC report on yoga dogs, Djahanguiri explains, “I saw people doing yoga on the beach and there were dogs running around freely, and I thought there must be some way of actually combining the tradition of yoga with the humans and the dogs together.”

Generally speaking, practitioners help their pets achieve certain poses. With some assistance from humans lifting their limbs, many dogs can accomplish poses like Chaturanga, Savasana, and Chair Pose. Read more about the trend of doga in this New York Times article cleverly titled “Bonding With Their Downward-Facing Humans.”

Here’s one glimpse into how yoga dogs actually look when they’re engaged in doga:

Yoga for Dogs: Where to Find These Classes

Many major cities around the world offer doga classes, from New York to Chicago to Seattle. Here’s one dog yoga class in Long Island, New York. Los Angeles has a similar class.

Is your pooch a yoga dog? There’s only one way to find out! Of course, given that many dogs aren’t too keen on participating in yoga, it’s just as likely that your pet will be the type of yoga dog who interrupts your workout instead of helping:

If you decide to give doga a shot, chances are you’ll enjoy it more than your puppy. But you never know – maybe your pooch will be the one who takes to it right away. Good luck!

1 thought on “Dog Yoga: Here’s the Scoop on Yoga for Pooches”