Gaiam yoga gloves are among the top gloves on the market, so let’s dive into an in-depth review. As more and more yogis discover the benefits of yoga gloves, brands are starting to manufacture more varieties of gloves to give people options.

Gaiam is one of the most prominent yoga brands around. They make just about every type of product available, from yoga mats and towels to foam blocks and straps. How do their fingerless gloves stack up? Read on for more!

This review focuses on Gaiam’s fingerless yoga gloves, which are one of the top brands of yoga gloves available. For several more options, check out our complete guide to the best yoga gloves on the market.

Gaiam’s yoga gloves feature a pretty standard design. They are fingerless, which keeps your fingers free to grip the mat. They fit snugly, while allowing some room to breathe.

Most notably, the gloves feature a pattern of colored dots. These dots provide the grippy traction that will keep you from slipping off your yoga mat. 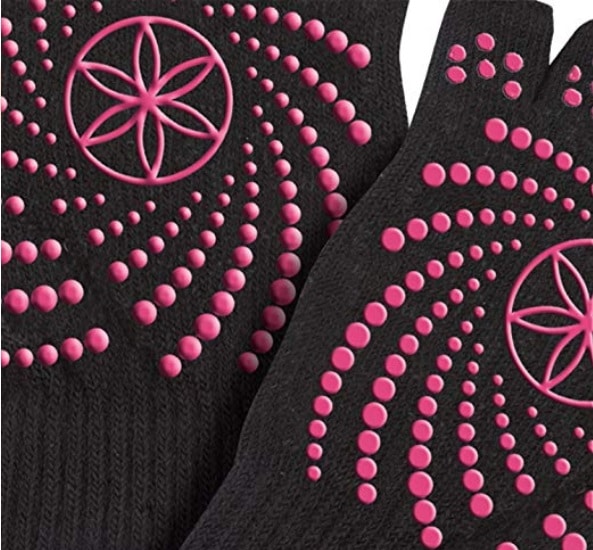 The Gaiam gloves come in “one size fits most.” So unless you’re a very large dude with big hands, these will probably work for you. They are 92% cotton and can be washed in cold water.

As of this writing, Gaiam’s fingerless gloves come in three varieties. There are Black and Pink options, and there’s another Black option called the “Performance” glove. This one has a slightly different dot pattern, and it features an additional hook & loop strap that allows for an extra level of customization to your exact hand size.

Users give the Gaiam gloves good marks, with a few caveats. The gloves do provide good traction, although some folks say that other brands are a little better at providing better grip. While they may not be a perfect fit at first, they will become more comfortable once you break them in a bit.

Also, the gloves can be warm. So if you’re practicing hot yoga, these gloves would probably get a bit uncomfortable. You may want a thinner glove in that case, like the Yoga Paws SkinThin Non-Padded Glove.

Of course, the flip side is that Gaiam gloves are quite affordable. Most types cost around $10 or so for a pair. So there’s virtually no risk in buying a pair and giving them a try if you’re curious. Overall, we rate these gloves a B+, as the low price offsets most of the drawbacks.

Yoga gloves of all types can help you avoid wrist pain and calluses. They also give you the ability to practice yoga without a mat. Oh, and they look cool too. If you pair an eye-catching set of gloves with a colorful yoga mat and yoga towel, you’ll be turning heads at the yoga studio.