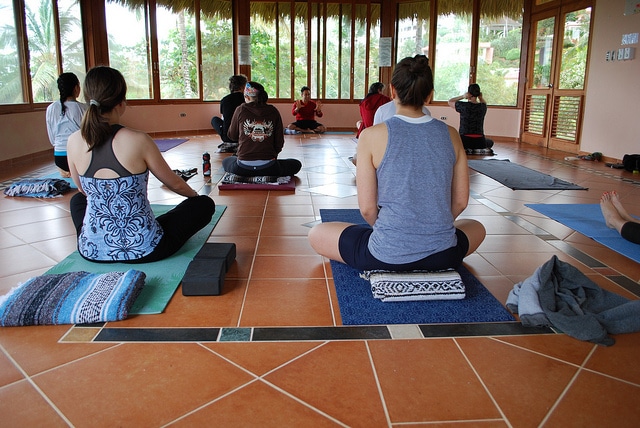 Stroll through any Western city these days, and yoga’s popularity is immediately apparent. The past decade has seen more and more yoga studios opening up, along with more classes being held in gyms, parks, and corporate offices. Sporting goods stores sell foam yoga blocks and display mannequins in lotus pose, and people wear yoga pants to Starbucks and sling yoga mats over their shoulder on the bus.

What was once an esoteric practice has become firmly mainstream. But where did yoga come from, and how did it get so popular in the West?

Yoga is believed to have originated in India at least 5,000 years ago. It originally described meditation practice and the search for enlightenment rather than an exercise regimen. Hatha yoga eventually emerged as a technique to prepare for meditation, but was not intended as a workout for its own sake.

Yoga’s Spread to the West

Many yoga masters helped bring yoga to the West around the mid-20th century, but none are more celebrated than T. Krishnamacharya, “The Father of Modern Yoga.” Yoga as we now think of it stems from the Ashtanga and Iyengar styles developed by his most prominent students, K. Patthabi Jois and BKS Iyengar.

For decades after yoga was introduced to the West, it remained confined to the fringes of society. In 1975, The Lancet published the first scientific study on yoga, and a handful of additional experiments were conducted over the next twenty years. By showing evidence of yoga’s benefits, these early medical studies gave the practice mainstream legitimacy in the West.

While scientists and medical professionals have played a role in promoting yoga to the general population, popular culture has perhaps been even more influential. Today, prominent figures from Arianna Huffington to Sting swear by yoga, and magazines from Cosmopolitan to Time promote it to their millions of readers.

READ NEXT:  Yoga Pants vs Leggings and Tights: What’s the Difference, and Which Should You Choose?

The recent growth of interest in yoga is actually part of a larger shift toward better health and holistic wellness, marked by declining cigarette use and growing interest in meditation and health foods. Similarly, yoga’s popularity has paralleled growing interest in fitness and the explosion of other group classes like Zumba and CrossFit.

At the same time, yoga has grown in popularity at the same time technology and busyness have taken over our lives, and many people practice as a reaction against the typical Western lifestyle. Yoga represents a break from the real world, a chance to reset, or an hour of “me” time.

Westerners come to yoga for many reasons, and its ability to offer different things to different people, along with the face that varying styles are available, helps explain its popularity. People use yoga to get exercise, reduce stress, heal from injuries, or explore their spirituality, among other things. Western yoga has also incorporated everything from hip-hop and black lights to goats and beer in an effort to attract people who wouldn’t otherwise be interested.

If it still seems like yoga has gone from relatively obscurity to mainstream popularity overnight, well, it almost has. A recent study found that over 36 million Americans were practicing yoga as of 2015 – nearly double the number of practitioners just three years earlier.

While once considered the domain of young women, yoga is being practiced by an increasingly diverse group of people, including more men and seniors. Similarly, while yoga first gained popularity in major cities, especially on the East and West Coasts of the U.S., it has started to spread to smaller towns and more remote areas as well.

Now we’ve got items like yoga gloves and yoga hammocks for aerial use. It seems like everyday, there’s a new product on the market!

READ NEXT:  How to Know If You're Ready for Yoga Teacher Training

The Future of Yoga

As our lives continue getting busier, people are still desperately seeking a way to slow down. With new studios popping up, different styles emerging, and more people enrolled in teacher training than ever before, Western interest in yoga shows no signs of declining.

Meanwhile, people of all ages are getting into yoga. Older people have learned about the benefits beginning yoga for seniors. And parents have learned about which yoga gear for kids they should have to get the young ones involved.