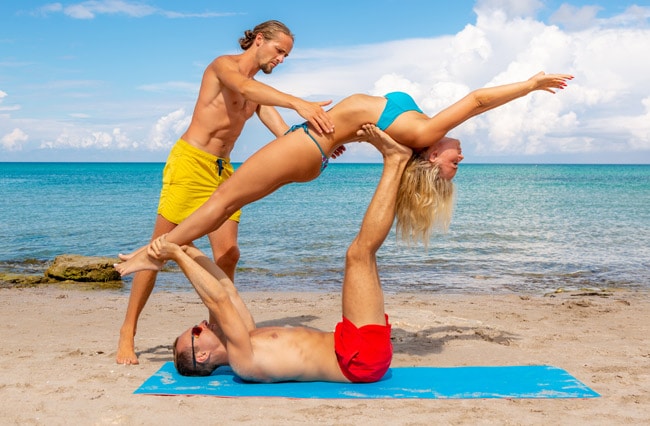 Yoga is sometimes considered a formal, serious affair centered around meditation and spiritual growth. On the other hand, you can also do yoga with a goat! Or while drinking beer! And you can perform poses that look and feel completely ridiculous!

Weird yoga styles and poses have been growing in popularity as newcomers to yoga seek out ways to bring a wild and crazy element to the practice. Almost anything goes these days!

There’s no formal definition for what “weird yoga” is. We’re using the terms weird and crazy in a positive sense. We want to share with you unusual and fascinating poses and styles that you may not be familiar with!

This article combines two related topics: crazy yoga styles, such as beer yoga, dog yoga, naked yoga, and other trendy forms of yoga that some folks are into these days; and weird yoga poses, aka those poses like Super Soldier Pose that look silly and ridiculous when you perform them.

Read each of these sections to expand your yoga horizons and add some funny yoga poses to your life!

Let’s start by looking at some of the weird yoga poses that sorta look or feel silly!

Also known as Knee-to-Ear Pose, Ear Pressure Pose tops our list of weird yoga poses. From the side angle, it makes your entire head seem to disappear. It takes tremendous flexibility to pull this one off. That stretch tho!

Embryo Pose involves almost tying yourself up in a knot, as you place your hands through the hole between your raised and crossed legs. This position feels nice to rock back and forth or lean forward and backward.

Happy Baby is comfortable but it sure looks scandalous, as you lie on your back, put your legs in the air and grab your feet. My favorite instructor always calls it by another name: Happy Boyfriend Pose. Haha!

Take your basic Lotus Pose, twist your arms behind your back like a pretzel, and grab your feet. Congrats on achieving Bound Lotus Pose!

If you’ve got realllly strong arms and realllly flexible hips, then open up those legs and try Firefly Pose. If you plan on doing this pose a lot, you may want to grab some yoga gloves like the yogi in the photo.

Twist your joints into some unnatural positions with Flying Crow Pose. This is an advanced posture, because you’ll need enough strength and balance to hold yourself up and cross one leg over the knee.

Now let’s take a look at some silly and funny yoga styles. These are different types of weird yoga practices that you may encounter somewhere in the world. These are definitely not your typical studio class!

Goats, horses, and dogs are some of the critters that various yogis around the world have tried to incorporate into their practices. Doga, or dog yoga, may be the most common, since millions of people have their own dogs.

Some doga poses use the puppies as props, while others actually involve the dogs performing their own yoga poses, with help from their humans lifting their legs.

Meanwhile, “baby goat yoga” is a thing at some farms, where goats may jump on to your back while you’re in plank pose. There are even “horse yoga” retreats where participants spend the weekend around horses, soaking up their laid-back energy and even performing poses like backbends on top of the horses.

The idea of bringing booze into the world of yoga began in America (of course), but has since spread from the Burning Man festival to Germany, England, Australia, and many other countries. Beer yoga can take place inside an actual brewery, or at a regular yoga studio.

Beer yoga simply involves chugging down brews between poses. It’s a strange practice, one that definitely goes against traditional yoga techniques. But if it gets more guys to try yoga, or if it opens up new people to the world of yoga, then perhaps it’s worth it.

This one’s easy to define: It’s regular yoga, sans clothing! For some folks, baring it all might be frightening or shameful, which is the complete opposite of the relaxed mental state that yoga is supposed to achieve.

But there are plenty of nudists and free spirits who find being without clothes to be freeing and exhilarating. Besides, being willing to do yoga naked creates an enhanced level of body acceptance. When you look around the room and see a bunch of folks who aren’t self-conscious at all about their average bodies, that may just convince you to be less critical of your own appearance. 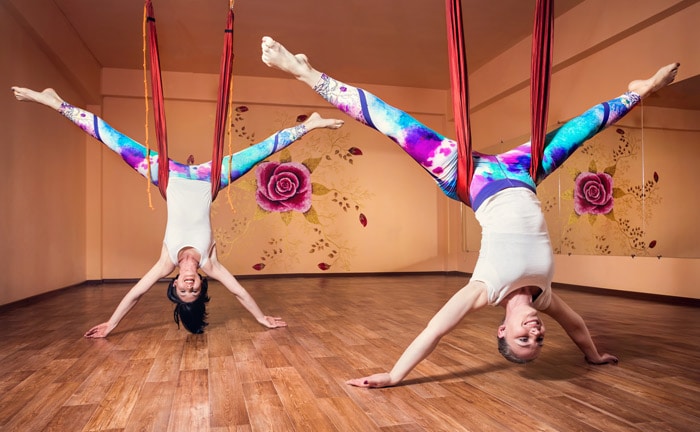 Get your Cirque du Soleil on with aerial yoga, aka anti-gravity yoga! Practitioners support themselves in a yoga swing or hammock while they perform traditional yoga poses, as well as aerial poses that have been specifically adapted for this style.

The coolest part of aerial yoga is performing inversions, postures where your feet are above your head. You can do aerial yoga in some studios, but you can also do it at home, by purchasing a trapeze stand to set up your own rig.

Unlike some of the other yoga styles on this list, which are a bit silly and may not provide any actual benefits, aerial yoga provides obvious benefits: improved balance, improved strength, and an expanded repertoire of yoga poses.

SUP yoga is truly one of the coolest types of crazy yoga. Paddleboarding has become a huge craze, as people rent boards and learn to paddle while standing up on local lakes or rivers.

Paddleboarding requires excellent balance, a skill which is also inherently a part of yoga practice. So that makes it a natural transition to take standup paddleboarding into the realm of yoga. If you think it’s tough maintaining your balance during Warrior I pose on a yoga mat, try do it while standing on a wobbly board! 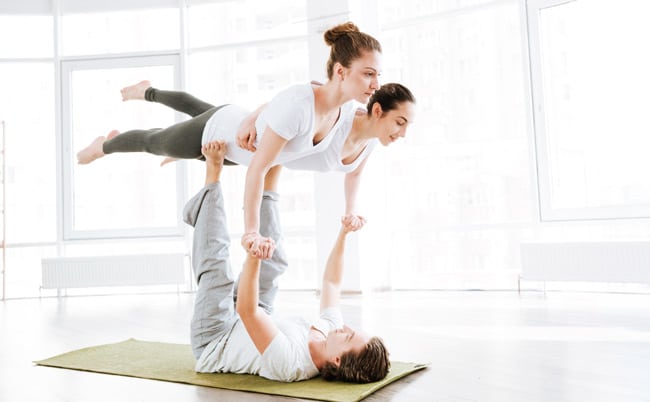 Yoga is fun with one person, so why not invite two or three people to the party? Acro yoga is an acrobatic style of yoga that involves lifts and other acrobatic moves in which the “base” lies on the ground, holding up the “flyers” in the air.

READ NEXT:  What Size of Yoga Mat Do I Need?

Acro yoga can be incredibly fun, since you get to try poses you’d never normally have a chance to do. Plus, it’s always fun to soar like Superman, right? There is an element of risk involved, so make sure you trust your partner. You can even bring along a whole group and try some 4 person yoga poses!

If you can incorporate beer into yoga practice, why not put pot and pranayama together? Actually, it makes some sense, as ganja is a natural plant that can offer relaxing effects and make people feel more in touch with their body.

Who knows – those soothing poses might feel even more enjoyable after taking an edible. You might never want to come out of Child’s Pose! The substance is still illegal in many states and countries, so obviously this practice can only take place is certain areas. It’s probably best for times when you’re doing a yoga routine at home.

Here’s one crazy yoga style that is hard to believe! If the idea of belting out “Don’t Stop Believing” while holding Downward Dog sounds fun, then karaoke yoga may be for you!

Karaoke yoga is not a widespread phenomenon. But a small handful of instructors have offered the practice. They build sessions around singing and active, movement-based postures. It’s more about fun and energy than actually following a strict regimen of poses. Take a look at this video of a karaoke yoga session to take a glimpse:

Yes, there’s actually a type of yoga that involves the harmonica! David Harp developed the style, which teaches people to “blow their blues away” while learning to meditate.

He refers to the harmonica as the “ultimate stress reduction tool.” While some folks may think that the carnival-esque sounds of the novelty instrument wouldn’t be conducive to yoga practice, Harp points out that playing a harmonica and performing yoga both require capable breath control. Maybe playing a few notes can help you breathe properly in your next yoga session!