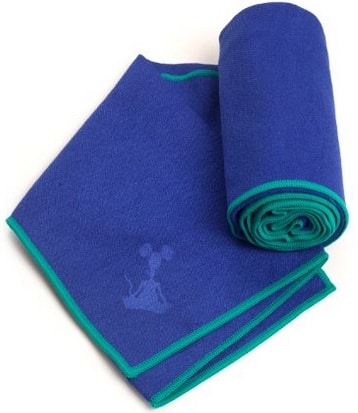 Most everyone who practices yoga will need a towel. Yoga towels are used primarily for two purposes: To place on top of a yoga mat to improve grip and traction, and to wipe away sweat (especially in a hot yoga environment).

Finding the best yoga towel can be tricky. Some people try to remedy the fact that their yoga mat isn’t “sticky” enough by using a standard bath towel to cover their mats. This is wrong on so many levels! Now’s the time to wise up and select an appropriate yoga towel to improve your practice and your peace of mind.

You may think all towels are created equal, but the differences in size, absorption level and price can make a huge difference. Read on to find the best yoga towel for you.

The two basic types of yoga towels are the mat-length towel and the hand towel. Mat-length yoga towels (at least 68 inches long) cover the entire mat and improve stability, while hand towels are designed simply to wipe your brow and sop up perspiration.

The mat-length towel is a popular choice for those who aren’t totally satisfied with the traction of their mat. These towels are specially designed to soak up sweat, unlike a basic bath towel, which won’t absorb moisture as quickly.

The nice thing about full-length towels is that they can be used on top of pretty much any yoga mat, even a cheap one. So if you’re on a budget, you can stick with the studio rental mats, or buy an inexpensive yoga mat while investing in a nice towel.

The video below shows a common mat-length towel and how to use it.

The hand towel, sometimes referred to as a “sport size” towel, is a smaller garment, with popular sizes including 30 x 20 inches and 25 x 14. This item is best for folks who already have a mat with great grip, such as the Aurorae Synergy mat/towel combo, and just need something to wipe their face during a hot yoga session.

Yoga towels are not terribly expensive. Many fall into the $15-20 price range, while some can go for as much as $50 if they are popular name brands or offer special features. Unlike most mats, towels can be machine-washed and dried, so they are easier to maintain and care for.

Most popular towels are made from microfiber materials and have similar thickness levels, so there’s generally not a ton of difference between them in terms of softness and comfort. Thus, choosing the best yoga towel for you is often a matter of comparing basic factors such as size, brand, and price.

And let’s not forget color – the towel is a good chance to express your own personal style, and many come in lots of bright colors. See below for a guide to finding the best yoga towel to meet your needs.

Reviews of Some of the Best Yoga Towels

For several years now, the Yogitoes Skidless Premium has been one of the most popular yoga towels available. The mat-length towel soaks up sweat and stays in place thanks to silicone nubs on the bottom that keep it from sliding while you move through your poses.

The Yogitoes Skidless Premium costs a bit more than many other towels, but the quality of the product is well worth spending the extra money. As an added bonus, this towel is available in more than two dozen colors, including such unusual shades as tie-dye, guava, kiwi, sand, stone, and groovy sway. Read our full review of the Yogitoes Skidless. 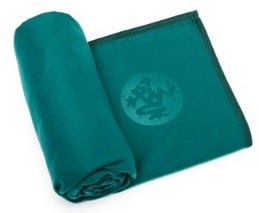 Our top-rated hand towel is the Manduka eQua, and its price tag is a steal. Manduka is one of the most reputable names in yoga, and the company’s Black Mat Pro happens to be one of the highest-rated yoga mats.

The eQua absorbs perspiration from your face and hands quickly. It’s soft, thick, and specially designed to dry fast and to keep odors under control. All of this product’s colors have exotic names, including thrive, midnight, magic, thunder, embrace, and verve. 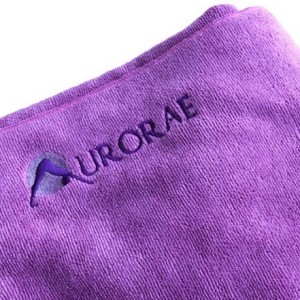 Aurorae’s products are always popular. Their sport mat towel comes in both mat-length (72 x 24 inches) and sport-size (30 x 20 inches.) As with most Aurorae products, the reviews are overwhelmingly positive. The absorbent material wicks away sweat far better than a typical cotton towel.

For the mat-length towel, it may be necessary to slightly mist or dampen the towel before using, in order to obtain maximal slip resistance. But that is true of most towels, so it’s not a reason to pass on what is otherwise an excellent product. If the Aurorae is not the best yoga towel on the market, it’s close.

The YogaRat also comes in mat-length and hand-size versions, and both are soft, comfortable, and lightweight. I personally own the YogaRat hand towel, which I’ve used for more than a year with an Aurorae Synergy mat.

I practice hot yoga, so I need a hand towel that absorbs moisture easily. The YogaRat does that, and it fights odor to the extent that I can go a couple days without needing to wash it. The towel is also very durable. After dozens of washes over the past year, there’s no fraying or wear and tear, and no loss of color. I give this one my personal recommendation, but as always, shop around to find the one that best suits your own needs.