Cork yoga blocks are among my favorite yoga props, because they can help enhance your yoga practice in so many ways. For those who enjoy practicing with them, we’ve compiled a collection of the best cork yoga blocks available for purchase online.

What are yoga blocks used for? They are useful in helping to support the body in various poses, deepen stretches, reduce injury risk, and adding resistance. Cork blocks are typically heavier than foam ones, hence the reason they are sometimes called “yoga bricks.”

That extra weight is usually a good thing, especially when it comes to adding support and resistance. While it’s possible to use some other object as a substitute for a yoga block, to do it right you’re going to need the real thing.

Cork blocks may last longer than foam blocks, since cork is more durable (although it can crumble over time.) They’re a good long-term investment. Because of the nature of the material, your hands won’t slide around on a cork block like they might on a foam one or wooden block. And cork bricks are not expensive. So you have no excuse for not having one (or two) of your own!

Choosing a Block: Things to Consider 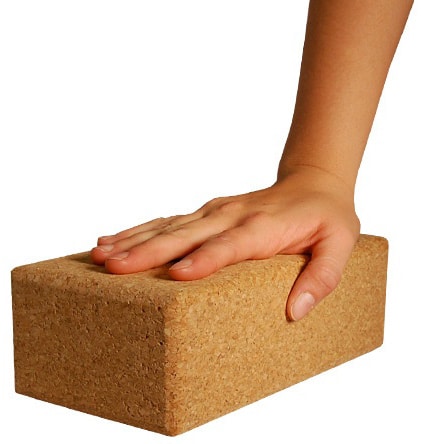 Let’s be honest: There aren’t a ton of differences from one cork yoga block to another. They’re all made from the same thing, they’re basically shaped the same, and they’re equally eco-friendly since they’re composed of cork. So how can you choose a good one?

Quality and price. The major difference you’ll find is quality, and that’s usually in proportion to price. If you simply seek out the cheapest cork block available, you could end up with one that isn’t well-made and doesn’t stand the test of time.

Hand size. If you’ve got small hands, perhaps one of the more thin blocks would be a better fit for your practice, rather than the standard size brick.

Balance. I admit it, I have terrible balance. Any other yogis out there in the same boat? If so, consider going for a wider block. That can provide a bit of extra support and stability.

Quantity. For many enhanced postures, it helps to have two yoga blocks, one for each hand. Blocks are typically sold as individual items, though more companies have started to offer two-packs. Be sure to check the quantity of the item you’re purchasing.

The standard cork yoga block size is roughly 9 x 6 x 4 inches, but as you’ll see, there are some variations and exceptions. Some blocks are wider or thinner, which can be ideal for those who require modifications. Thinner blocks provide less stability and support than the usual cork brick. So take note of size when purchasing a block online!

Unlike foam blocks, communal cork blocks aren’t often found at yoga studios. That’s because sweat and odors can seep into them, and you definitely don’t want to be using a cork block with someone else’s sweat inside it! No, cork blocks are an item that each person should purchase for their own personal use.

Generally speaking, you’re better off spending a few extra bucks to get a product that’s manufactured by a reputable brand and has solid user reviews. Even the most expensive cork yoga blocks typically don’t cost more than $30, so they do not represent a huge financial investment.

Here’s a guide to some of the top cork blocks for sale as of 2020. Hugger Mugger, Manduka, and Gaiam make some of the most durable blocks, but they’re sold individually, so if you decide that you need a pair, be sure to buy multiple items.

Scroll down to the second half of the article to read reviews and our recommended choices for yoga bricks you can buy as a two-pack. Da Vinci, Peace Yoga, and JBM International are among the companies that sell pairs. One company prints cool yoga-themed designs into the blocks, while another offers a free yoga strap with purchase. Read on! 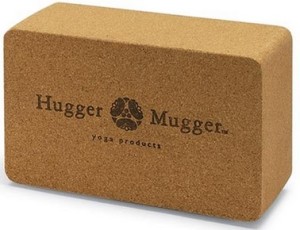 We aren’t in love with some of Hugger Mugger’s yoga mats, but the Hugger Mugger yoga block is solid, literally and figuratively. Hugger Mugger is known for being one of the most eco-friendly yoga brands, and their blocks are no different. The company boasts about its “fully sustainable harvesting process.” The folks I know who have used these blocks offer them unanimous praise.

This cork brick really doesn’t have any negatives, except that it’s sometimes out of stock on Amazon. If that’s the case, though, you have plenty of good alternatives. 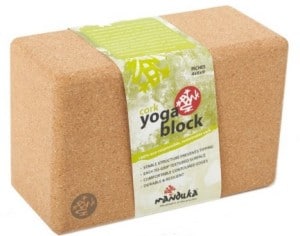 Once again the excellent brand Manduka appears in one of our best-of lists, just as the company showed up in our recaps of the best yoga mats and yoga towels.

READ NEXT:  Black Friday and Cyber Monday Yoga Deals for 2020

The Manduka cork brick is a full 4 inches thick, but it’s made of cork that is slightly more lightweight than some other blocks. So it’s a good choice to transport to the yoga studio. 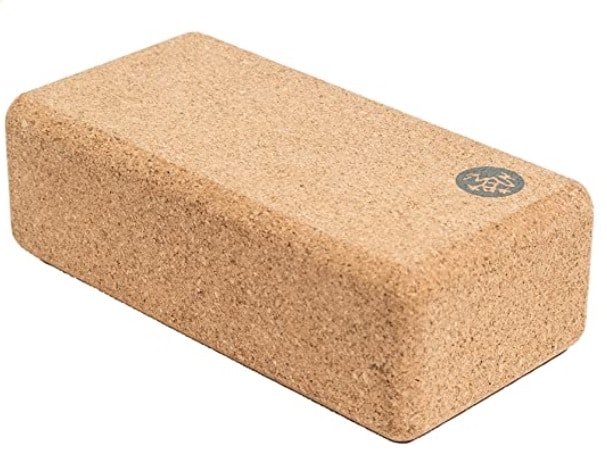 They call it the Lean Block, and they mean it! This is one of the thinnest, most compact cork blocks you will find. It measures just 8.6 x 4.3 x 2.7 inches, as compared to the usual 9 x 6 x 4. So it’s super lightweight.

It’s still solid and can provide good stability, but its compact size makes it a good choice for those with smaller hands or smaller bodies. After all, it doesn’t make sense for a petite woman to be using the same size block as a giant dude with a football player build, right? This one is for the smaller folks. 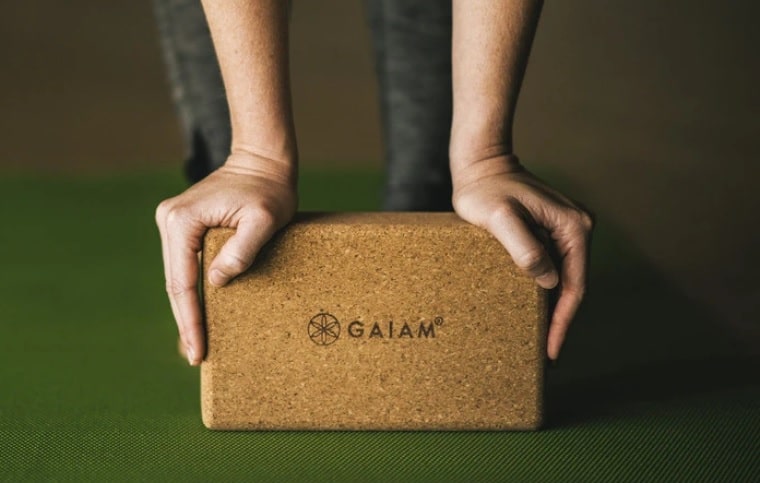 The Gaiam Cork Yoga Brick is a pretty standard cork block. Gaiam makes two very similar products: The “Brick” measures 9 x 5.5 x 3 inches, while the “Block” measures the standard 9 x 6 x 4 dimensions. Sometimes Amazon gets them confused and lists them together on the same product page, so double-check the item you’re purchasing. Both items are made from durable cork and are made to last.

The Best Two-Packs of Yoga Blocks 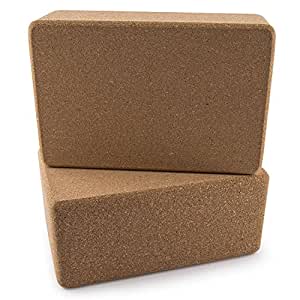 Another of the best-rated cork yoga blocks is this Da Vinci two-pack set. These are basic in terms of design and appearance, but they get the job done. The Da Vinci blocks are on the heavy side, which makes them sturdy and likely to last a long time. 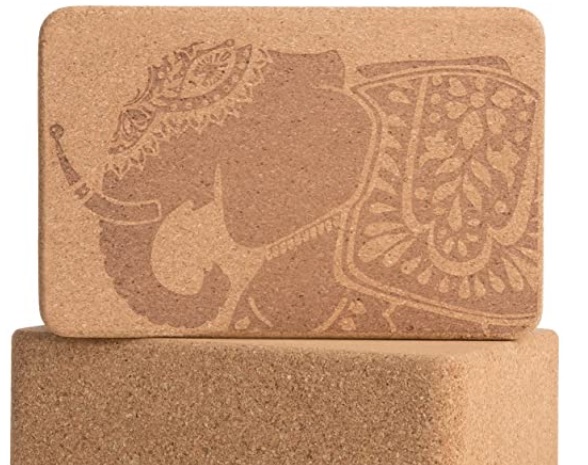 Who says cork bricks have to look boring? While most other cork blocks look exactly the same, this two-pack from Peace Yoga comes with your choice of four designs printed into the cork: Elephant, Mandala, Sun, or Tree. How stylish!

Here’s proof that you don’t have to spend a fortune to get a quality product. The Peace Yoga pack is the most affordable item on our list of the best cork yoga blocks. It comes in the standard 9 x 6 x 4 size. 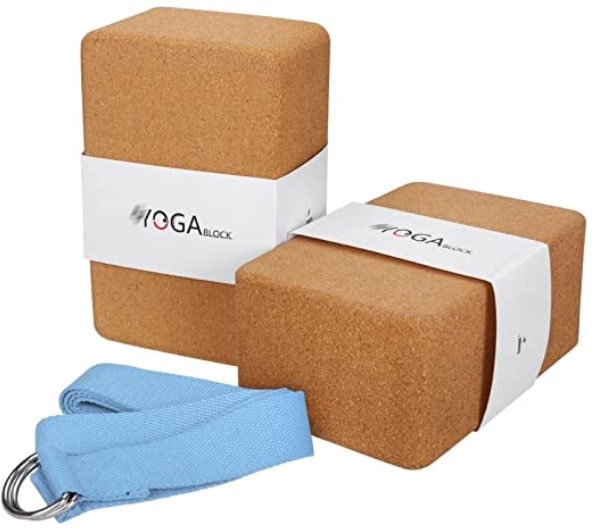 The JBM International two-pack includes two basic blocks. There’s nothing noteworthy about the blocks themselves, but the cool thing about this set is that it comes with a bonus yoga strap.

Yoga straps are used to enhance poses and deepen stretches. That makes them a natural companion for yoga blocks, which can serve the same purpose. It’s only logical that they be sold together. Kudos to JBM International for being the first to realize this!

The ProSource blocks come in a package of two, making them a good value for the budget-conscious. Just one caution: These blocks are 3 inches thick, as opposed to the standard 4 inches, so they are not quite as sturdy and steady as the first two brands on this list. If you are in need of a thicker yoga block, you may want to go with one of the other options.

How to Use Cork Blocks to Enhance Your Practice

If you need some pointers on the best ways to incorporate blocks into your home routine, here’s a nice tutorial video.

A single yoga block can be utilized in many ways. The most obvious is to sit on the block during a squat, or to support the head in child’s pose. You can lie on the block during simple backbends, placing it underneath your tailbone or in the middle of your back, in order to open up your stretch. You can also place it between the thighs during chair pose, which engages your core more and adds extra strength training on the legs.

A pair of blocks makes sense during forward bends and lunges, such as half moon and triangle pose. The blocks serve to “raise the floor” so you’re not hunching over too far and hurting your back. In that way, blocks are beneficial to your alignment. Those dealing with back pain will especially see a big difference.

You can work cork yoga blocks into lizard pose, bridge pose, and numerous others. Try them out to see just how much you can change your own yoga experience with a block or two.

Do you have any tips for using cork yoga blocks to enhance your practice?